Total insanity governs Vertigo's every action. With her mesmerizing powers of mind control and mastery of the unknown, she has attained mythical proportions among her followers. Vertigo's followers are loyal and their devotion is complete, fanatical and blind. She believes the defeat of all other dino-beasts for Urth domination can only be accomplished by utilizing her sorcery and the power of her devout followers... if she doesn't destroy their minds first.

The goddess of Insanity. Vertigo is a unique beast, identified on her action figure packaging as a "Cobrasaur Etraasia", resembling a cobra with dinosaur legs and short, spindly arms. She is one of the evil Destructive Beasts and is the only female beast on the roster. She has the longest reach. The game's plot states that her imprisonment on the Moon forced the other beasts into suspended animation until the meteor impact. Vertigo plans to enslave the entire planet forever by making humans into a slave race. Her domain is the Tomb, which resembles Stonehenge, and her worshippers dress in cyan. She is the only female member of the main 7 cast.

Long ago a sorceress named Vertigo appeared from another dimension. Then, in a great magical battle during the Mesozoic Wars, Vertigo was banished to the moon by the arch mage Balsafas. The meteor crash, however, has weakened the old shields enough for her to return and enslave the planet once again.

Reveling in her victory, Vertigo has enslaved hordes of humans, having them build her an insane palace in multiple dimensions. Few minds can endure the torture, but there are plenty of humans. One day, while practicing her arcane arts, she discovers a land where she is not queen... 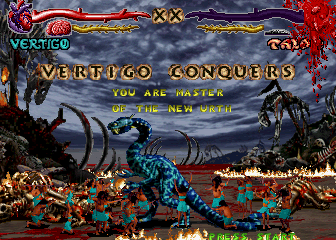 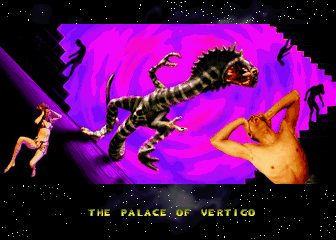