Talon is in his most vicious state when it comes to the defense of his raptor clan. Before the Cataclysms, Talon's home was peaceful and harmonious, but now Talon and his followers have been thrust into an unfamiliar life of power struggles, battling between tribes and dino-beasts. On the new Urth, Talon stands ready to take on any dino-beast threatening his people.

The god of Survival. He is identified as a "Raptor" on his action figure's toy packaging, and closely resembles the Velociraptors from "Jurassic Park", which had been released just the year before. Talon is the patriarch of a huge family of raptors and is fiercely protective of it, and it is for their sake that he plunges into the war. Talon is the fastest character in the game and an excellent jumper. Talon is also the shortest character, and numerous ranged attacks by taller enemies will simply miss him. He is the only character in the game who does not have a projectile attack. His domain is the Strip, and his worshipers are dressed in grey.

For eons, Talon was a great chief of a Raptor clan on a hidden South Pacific island. When the great meteor rearranged the continents, Talon's island was brought in contact with the mainland. Wanting to ensure the safety of his wives and children, he set off to eliminate all dangers of the clan's welfare.

Now Raptors live a life of luxury, and humans are kept as cattle or hunted as sport while Raptors lounge about in the sunshine. His clan is completely safe, and Talon will be happy until the newcomers arrive... 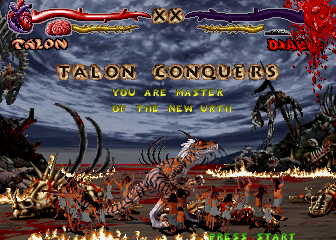 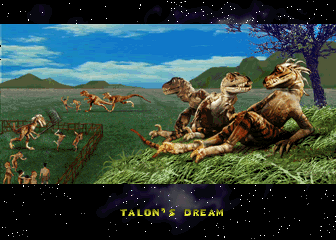