For some dino-beasts, immortality comes at a price. For Sauron, the cost is nothing less than an insatiable appetite. From his first appearance on the new Urth, as one of the Virtuous Beasts, he attracted many believers. With his mighty jaw, they believed him to be the most powerful among the barbaric behemoths. All of Urth is the battlefield for Sauron, as he towers into war after war, in his quest for domination! Waging war with the primal titans is what Sauron lives for, for in their defeat is tomorrow's lunch.

Sauron is a Tyrannosaurus rex; a curious blending of an old-school, Ray Harryhausen-esque tail dragging behemoth with a Jurassic Park inspired head. His color is a deep orange-yellow with purple stripes running along his back down to his tail. He sports two claws on each of his disproportionately small arms and three-toed claws on each foot. He sports massive jaws built for inflicting a massive amount of damage. He is one of two T. rex characters in the game, the other one being Diablo; the result of palette swapping a common character sprite to inflate the roster, as is common practice in retro arcade fighting games.

Sauron is the god of Hunger. When released from his sleep of ages by the catastrophe, he soon realized that he must devour human flesh to remain immortal. The hungry hordes of humanity worshipped him, but lived in dread fear of his presence. Many humans soon sought refuge with other rulers of the planet. Sauron had no choice but to defeat the others in order to feast on their followers.

Now that he has devoured most of the land, he sets off in quest of new lands, and new meals... 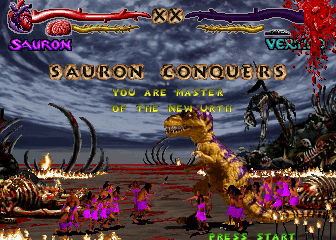 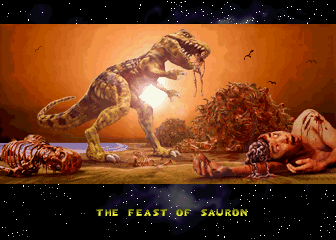 his name and personality are similar to the dark lord from lord of the rings.

Buddy, another t-rex, from Dinosaur Train, looks similar to him.