Now that Diablo, leader of the Destructive Dinos, has been released from his fiery prison deep within the Urth, he seeks to turn the world into a raging inferno. Determined to pursue his vision for Urth as a dominion of evil, Diablo thrives on inflicting immense pain and agony on his enemies. His followers and foes alike believe that Diablo is evil incarnate. Annihilation of all other dino-beasts is essential for Diablo to continue his reign of terror and carry out his gruesome vision for Urth.

Diablo's appearance follows that of a fire-breathing Tyrannosaurus rex. He is crimson red in color, and has dark, black stripes that follow the length of his body. He has two claws on his hands and three on his feet. He is one of two T. rex characters in the game, the other one being Sauron; the result of palette swapping an existing character sprite to inflate the roster, as was common practice in retro arcade fighting games. In the original arcade version, he is slightly shorter than his counterpart, though in the SNES port they are approximately the same height.

Diablo is evil in its purest form. He was released from his fiery prison, deep within the Urth, drawn by the pain and torment caused in the great Cataclysms. Now that he has conquered the planet, he lives to torture it. With none left to oppose him, he begins to burn the entire planet. Sparing only the cruel and vicious, he turns the world into a living hell.

For centuries, he will revel in the inferno he's created, until at last his rule is challenged by a traveler from across the great sea... 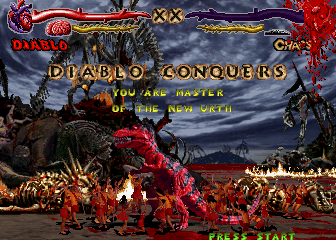 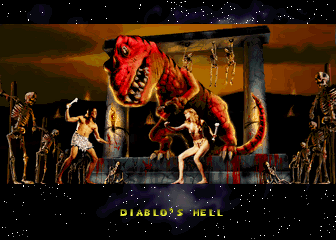