In his quest for control and domination over the world, Chaos has become his own worst nightmare. Right after the Cataclysms, he existed as a renegade scientist who coveted Blizzard's powers and wanted to take control of the new Urth. But his desire to dictate the process of human evolution proved to be his undoing when he conducted a genetic experiment that went horribly wrong. Instead, he was turned into a disgusting beast. Now he must do battle with and eliminate the other dino-beasts. Many of his special moves consist of bodily functions.

Chaos is identified on his action figure's character profile as a "Kong",  a gorilla-like creature. He has sickly pinkish to clay brown hair and grayish skin. His ape-like appearance is the horrific result of an evolution spell gone wrong.

Chaos was the mightiest witch doctor on the first continent. His greatest wish was to control the evolution of humanity. In his quest for power, he cast a mighty spell which backfired and turned him into a disgusting beast, forced to wallow in his own excrement for eons. During the Cataclysm, Chaos prayed to Throshti, God of Carrion, for release. However, to restore his greatness, he had to defeat all of his enemies.

Now, his task completed, he regains control of his life and leads his tribe to greatness. One day, though, his people will be threatened, and he will have to pursue power again... 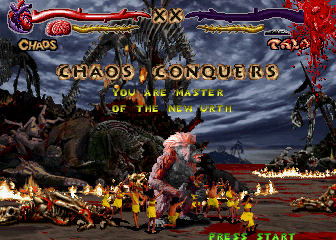 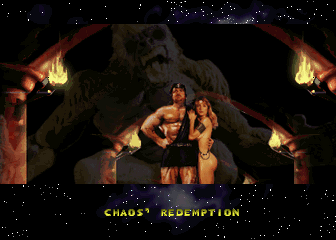