Blizzard is a playable character in the Primal Rage series. He is a Virtuous beast and the face of the first game.

In order for life to continue its natural progression, a delicate balance must be struck. This is the atmosphere that Blizzard has fought for millions of years to maintain. Enraged by the massive destruction he saw when he emerged from his primal slumber, Blizzard has embarked on a relentless execution mission. As guardian of natural evolution, Blizzard is determined to return Urth to its former state. As the leader of the Virtuous Beasts, Blizzard battles to return the balance to the Urth, even if it means destroying each and every dino-beast in the process!

Blizzard is a large Yeti-like creature, referred to on his action figure's character profile as a "Kong". His skin is ice-blue in color, with silvery brown hair. He has the ability to create and control ice.

Blizzard is a noble god, the essence of the animal spirit. Frozen for millennia at the heart of an immense glacier in the Himalayas, Blizzard was released when the Urth met the great meteor. He lived high in the mountains, descending only when threatened, and with his animal power and age-old wisdom, he was unstoppable.

With no threats remaining, he returns to his mountain retreat. One day, though, a new force will invade his land from across the endless ocean... 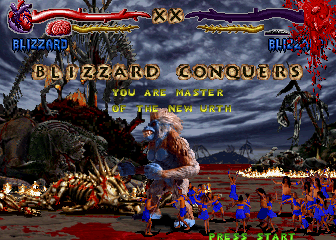 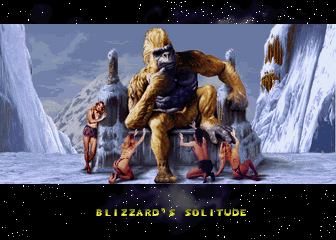 With Necrosan destroyed, Blizzard can finally complete his task of freeing the old yeti ancients from their frozen imprisonment. He travels to the north and south poles to speed the expansion of the polar caps. Icy glaciers advance down the continents, covering New Chicago and London under miles of ice.

The great Ancient Yetis are thawed from their frozen prisons and rule Neo Urth with ancient technologies of Atlantis.