Armadon is a playable character in the Primal Rage series.

Guardian of the delicate and fragile ecological balance, Armadon was the last of the dino-beasts to emerge from his subterranean confines. Connected with Urth's life force and energy flow, Armadon ascended to save the planet from the dino-beasts who want ultimate control over it. Ironically, the battle for power raging among the beasts has caused a nearly irreversible terminal imbalance on the planet they are fighting to rule. Unable to tolerate the titans' destruction of the planet, Armadon's mission is to put an end to the battle for supremacy and the immense devastation caused by it.

Armadon fights to defend Urth and prevent its destruction from the hands of the Evil Gods. He's identified in his action figure's character profile as a "Tristegasauratops", a semi-bipedal dinosaur with Triceratops-like head and limbs, a series of spikes in his back, and a tail, the tip of which resembles a combination of an Ankylosaurus' tail club and a Stegosaurus' thagomizer. Armadon has the easiest combos, but has a short reach. His domain is the Hollows and his worshippers appear dressed in light green rags.

For over a million years, Armadon had lived peacefully in his cave beneath the Earth's crust, telepathically linked to the biomass. The Cataclysms and the battles for supremacy over the changing planet tortured him, so he rose up to settle things once and for all.

Now that the threat has passed, he settles down into the ground to enjoy some well deserved rest. The land is scarred, but calm. At least for now... 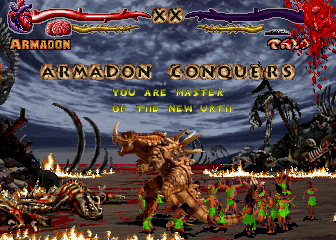 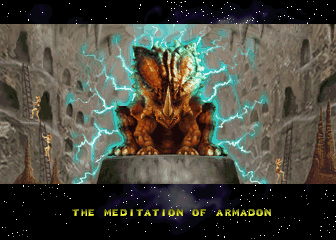 Ah! Finally with Necrosan defeated, Armadon can get some well-needed rest. He retires to the crystal caverns to sleep and revitalize himself.

He dreams of a distant time long past.

It was a time before the arrival of other Dinosaur Gods, when Armadon alone ruled the Urth.